A Spin Around the Block

When a friend in Sydney suggested that I have been spending a bit too much time doing indoor things like visiting museums and galleries I decided that maybe I should take a bit of a walk around the block today. It took me 5 hours and I covered just on 7 kilometres. In that 7 kilometres, I found many things to engage my interest.

Just around the corner from my little house are two beautifully conserved Rome temples. The first is the Tempio di Portuno which can be seen in the distance in the accompanying photograph. There are conservators working there now but, of course, ordinary folk can’t get inside the fence. The second is the beautiful circular Tempio di Ercole Vincitore. 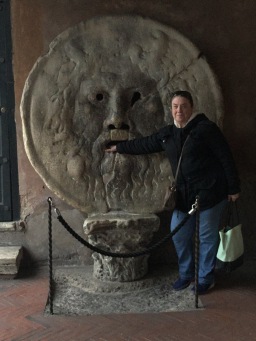 Across the road is the ancient little church, Santa Maria in Cosmedin, where I tested myself at the Bocca della Veritas and can away with fingers intact. Are you old enough to remember the movie that made this monument world famous? 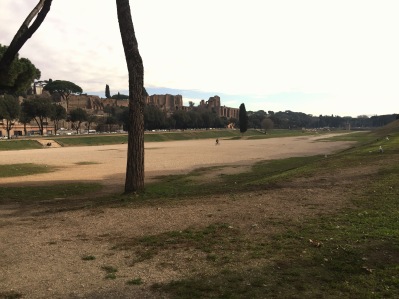 The next point of interest in my stroll around the block was the Circo Massimo where I tried to image what it would have been like in ancient times. I couldn’t manage this trick because I don’t know whether the horses ran clockwise or anti-clockwise especially as there was traffic going down both sides of the monument to disturb my train of thought. There is archaeological work going on at the end furthest from the centre of town which will restore the original entrance.

Curving around the back of the Palatino, I could enjoy the view from outside the fence of the historic area of the centre of ancient Rome as I walked toward the Anfiteatro Flavio, otherwise known as Il Colosseo and the Arco di Constantino. After a brief stop for lunch, it was time to do an inspection tour of the ‘big pile of concrete’ as instructed by my friend back at home.

Leaving the Colosseo my path then took me along Mussolini’s grand parade which leads from the Piazza Venezia to the Colosseo which runs along the side of the Foro di Nervo. The road is flanked by ancient Roman statues which the local wildlife treats with great disdain. A side road leads up behind the enormous Vitorio Emanuelle war memorial and up to the Campidoglio where I pass every day on my way home.
A short walk down the back of the Campidoglio brought me back to via San Giovanni Decollato and to the end of my little spin around the block. Tomorrow I will find another gallery to visit to continue my indoor life.

One thought on “A Spin Around the Block”

Why didn’t you tell me earlier